How to Play and Win Sportstake 13

Learn how to play Sportstake 13 (or Soccer 13, as you might know it) and find out what you need to do to win. The rules of the game are straightforward: you just have to predict the outcomes of 13 soccer matches from around the world. You don’t even have to predict the scoreline, only whether each match will be a home win, an away win, or a draw. Follow the steps below to get started.

The matches that you can bet on change as the soccer season progresses, so the first thing to do is find out which ones you can bet on next. Two rounds of fixtures are played every week; there’s a midweek fixture list and a weekend fixture list.

You can view the next round of matches on the Sportstake 13 Fixtures page. New fixtures are added every Monday morning (the midweek fixtures) and Friday morning (weekend fixtures). You can also obtain the lists from any National Lottery retailer.

Predict the outcomes of all 13 matches

The betslip is separated into a number of game boards, each of which has 13 rows and three columns. Each row corresponds to a match on the fixture list and the columns denote the three possible match outcomes: 1 for a home win, X for a draw, and 2 for an away win.

Mark at least one box in every row to bet on each match outcome. You can also mark more than one outcome per match – this is a Multi-Play, which you can find out more about below. If you do this, you also need to mark the Multi-Play box.

Propick offers an automated way to play – think of it as Sportstake's version of a Quick Pick. Unlike Quick Picks, however, Propick does not generate your entry completely at random. It also takes into account the weighted results from previous fixtures when generating the predictions.

Just mark how many boards you want in the Propick section of the betslip, from a minimum of four to a maximum of 256. The Propick system will then generate that many Multi-Play boards; the total cost of the bet is shown alongside your selection.

You can manually bet on more than one match outcome at the same time by filling in multiple game boards on the betslip. This is the same as filling out one game board with a Multi-Play bet, but does at least make it easier to track which bets you've placed.

The same rules apply: just mark one or more match outcomes in each of the 13 rows, and mark the Multi-Play box if required. If you make a mistake or decide against a particular bet, mark the 'cancel' box and it will not be added to your ticket.

Pay for your entries

After you have filled out your betslip, hand it to the teller and pay for your ticket. If you play online, you just need to check out with your bets and ensure there are enough funds in your account to cover the cost. Sportstake 13 costs R2 per board.

A Multi-Play is a combination of a Quick Pick and a system entry. It allows you to bet on multiple outcomes for the same match and increase your likelihood of winning. Every possible combination of outcomes that you predict will be generated as a separate board, and you pay the R2 cost for each one.

For example, you could bet on the first fixture on the list being a home win or an away win. This is known as a 'double', as you bet on two of the three possible outcomes. You could then bet on the other 12 fixtures ending in a home win. In that instance, two boards would be generated. The first would be the bet on 13 home wins, and the second would be the bet on one away win and 12 home wins. You would therefore pay the cost for two boards – R4. 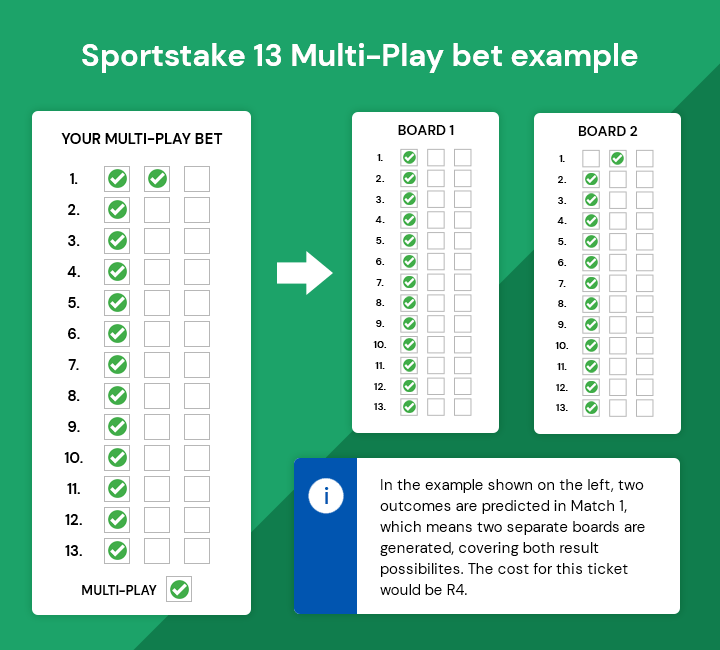 You can also bet on all three outcomes for the same fixture: home win or draw or away win. This is known as a ‘triple’. Example: you could bet on a triple on the first fixture on the list and then home wins for the other 12 fixtures.

You can place Multi-Play bets on whichever fixtures you want, but the maximum amount you can wager on each betslip is R2,000. There are 1,594,323 possible combinations of home win, away win, or draw across the 13 fixtures, so it is not possible to cover all of them.

You win Sportstake 13 if you correctly predict the outcomes of at least 10 matches on the same board. Predict all 13 and you win the top prize. The match result is taken at full-time at the end of 90 minutes plus extra time (if played). Penalty shootouts do not count towards Sportstake 13 results.

Fifty percent of the revenue from Sportstake 13 ticket sales is used to fund prizes. That money is then split between each of the four prize divisions and is shared between the winners. The table below shows the percentage of the prize pool that is allocated to each division, as well as the odds of winning and the average payouts from recent games.

* These are the odds of correctly predicting the match outcomes if they were entirely random. The results of soccer matches are, of course, not determined completely at random, so there may be some variance in the actual chances of winning, depending on which teams are competing.

If no one correctly predicts all 13 outcomes, the money in the jackpot will roll over to be added to the Division 1 prize fund for the next set of fixtures. There is no limit on the number of times the jackpot can roll over – it will keep doing so until it is won.