The Italian Million Day lottery gives you the opportunity to become a millionaire every single day. It's simple to play and you can take part online from South Africa as well as Italy. Don't miss the "Extra" MillionDay Plus game too!

The game has good odds of winning a prize overall, and what's more, with seven chances to win each week, you're never far from your next chance to win €1 million (approx. R18 million).

Learn more about how to play and the prizes that are available in Italy's daily game.

Predictions for the next Italy Million Day draw

There are many different ways to pick your numbers for the Italian Million Day draw, including the use of Predictions. The numbers predicted by za.national-lottery.com to appear in the next draw are:

Please note that the predictions shown above are not guaranteed to win a prize in any lottery draw. They are the outcome of statistical analysis of previous numbers drawn.

How to Play Million Day from South Africa 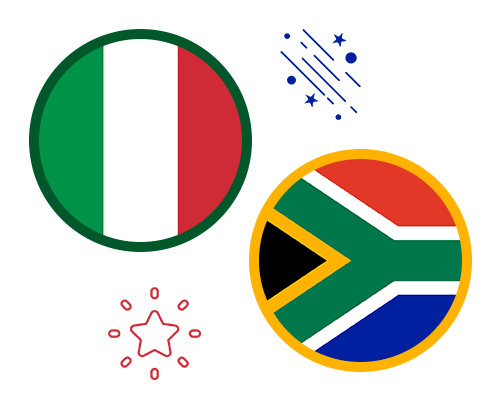 Italian Million Day draws are held daily and it could not be easier to take part. You can buy tickets from lottery retailers across Italy, or take part online from countries around the world including South Africa. The steps below tell you how to play:

When you play Italy Million Day online from South Africa, your numbers are automatically checked for you. There isn't a paper ticket to keep safe and you will be notified if you win. Prizes will be paid straight into your online account or, for larger awards, you will be guided through the claims process. Online players also have the convenience of being able to take part from the comfort of home.

MillionDay Plus (known in Italy as Extra MillionDay) is a second chance lottery that can only be played if you have bought a ticket for the main draw.

For an extra €1.00 per ticket, you can enter your five numbers into the Plus draw, giving you an extra chance to win!

Many other lotteries around the world offer similar games, where the lottery is not a standalone draw, and can only be played in addition to the regular game.

The Extra MillionDay draw offers a top prize of €100,000 - or one tenth of the regular MillionDay prize - however you are essentially giving your ticket a second chance to win one of the four prize divisions available, which are listed below:

To win a prize in Italy's Million Day game, you must match at least two of the five numbers. The payout increases as you match more numbers, right up to the €1 million jackpot for matching all five. All of the prizes are fixed amounts, and the jackpot does not roll over if there are no winners. The table below shows how much you can win in each division, plus the odds for each category.


About the Italian Million Day

Million Day began in Italy with its first draw taking place on 7 February 2018. The first jackpot was won in the tenth draw, thanks to a player from Catania on 16 February.

The game was initially only available at retail outlets in Italy, before it started to be offered online domestically. Players around the world can now take part in the Million Day game thanks to online services.